Years ago, I did a lot of development work on a time zone conversion tool. It let you type in any city name (Google Maps would help you with the spelling) and add it to a list. The list would graphically show daytime hours in each city, and how they overlapped, so you could find a good meeting time for people all over the world.

In the course of development, I learned a lot about time zones. A few fun facts: 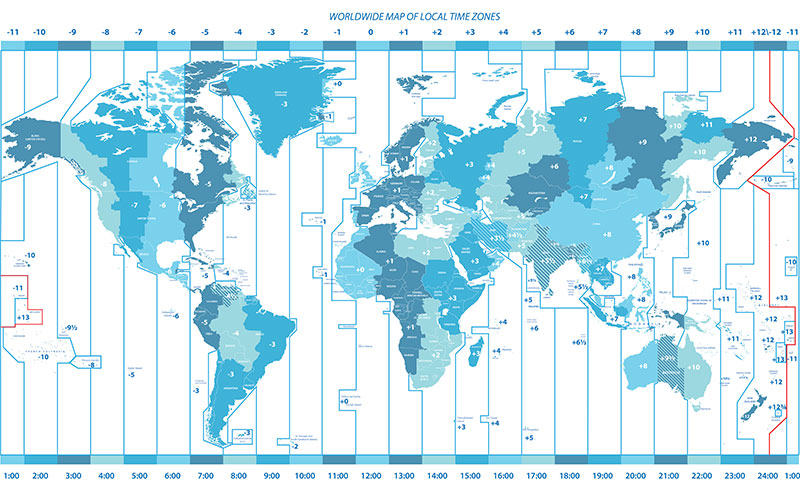 Not every country uses hour increments

Nearly every time zone is an integer plus or minus UTC (Coordinated Universal Time), like -07:00 for Mountain Standard Time in Denver. However, a handful of countries use 30-minute increments, like Newfoundland Standard Time at -03:30.

An even smaller number of time zones (three) are offset by 45 minutes, like Nepal Standard Time at +12:45. They really, really wanted to be specific with their time.

Many Americans know about the case of Arizona, which refuses to follow Daylight Savings Time (good for them), but there are even stranger instances in the world.

GMT and UTC are basically the same thing

You may have heard of Greenwich Mean Time or GMT, and it is based on the sun reaching its highest point in the sky over Greenwich in the UK. This was the original base time for calculating time zone offset – other time zones were plus or minus GMT so many hours.

In 1972, GMT was replaced with UTC for sciencey reasons.

Now, UTC and GMT are essentially the same thing, but you have to be very careful with that. Some countries that follow GMT still mess with their clocks for daylight savings. So even though the United Kingdom is on GMT in the winter, it is on British Summer Time (plus one hour) in the summer.

Which is why you might be making a typo every day…

As mentioned above, locations that move their clocks for daylight savings time are actually changing time zones!

This is a critical distinction. Time zones do not change – ever (usually). As I write this, it is 10:05 AM Mountain Daylight Time (MDT). It is also, currently, 9:05 AM Mountain Standard Time (MST).

When writing an email to set up a meeting, how often do you offer times like this?

As a side note, to make things really confusing, EST does not stand for “Eastern” – it stands for “Eastern Standard Time,” which is of course different from EDT or Eastern Daylight Time.

Debate the merits of daylight savings time all you like, but it sure is complicated.

To keep from being flat-out wrong when you propose meeting times, just use the abbreviation without the Daylight/Standard designation, i.e. PT, MT, CT, ET.

It is perfectly acceptable to say, “Eastern Time,” “ET,” or simply “Eastern” to mean “the time that the US Eastern Time Zone will be using on whatever date we’re discussing.”

If you always write your time zone with “Standard” in it like “EST,” more than half the year you are incorrect. (Except you, Arizona, you just keep doing your thing).

Blog Home
Static Logos are Dead?
How to speak (and write) like a human - (The first in a five-part epic)